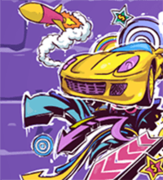 The police and the mob is after your life. Police want to put you behind bars and the mob want their money. Steal cars and get away from the cops to pay off your debt to the mob.

Use [WASD] or the [arrow] keys to accelerate and balance, and hold [spacebar] to use your boost when the meter is full. [Z], [X] and [C] will fire rockets at the nearest hazard if you have them, but since police cars can do the same, keep an eye on your health at the top of the screen.