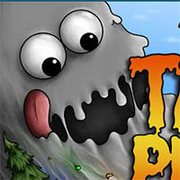 Control a tiny ball of grey goo which eats everything around it. The more it eats, the bigger it gets! The goo eats anything that gets in its way: dirt, bacteria, bugs, mice, cats, cars, trees, houses. Everything! Soon the entire planet will be eaten by this crazy ball of goo. Fortunately you’re on the goo side.

Control the goo with the arrow keys or WASD keys. Eat everything smaller than yourself. The arrow points to the largest nearby entity that you can eat. Avoid larger entities, some them will hurt you if you touch them. Some of them will even eat you!

The Horrors from Planet 10