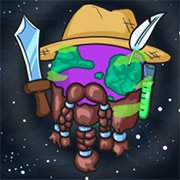 Petty Puny Planet is a cool and funny simulation game where you micromange an entire planet.

Why have a pet rock when you can have a pet planet? Micromanage this cosmic massive rock from its humble beginnings and take its people to places they never thought possible! Sure, you can teach them about food and science, but what if you take some liberties with evolution?

You’ve got a planet, and you have to decide what happens to it. But being the boss is such a tiring job, so you have to take a century long rest after every decision. Let’s hope they can manage without you for that long. Every action you take can change the tiny people’s destiny!