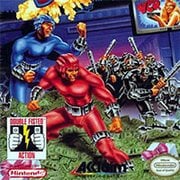 Step into the televised game show of Super Smash TV, where battle to the death against mutant cyborgs and others while being aired live to millions of people sitting at home.

The goal is to shoot all enemies to unlock the next level. Win prizes for each level completed, after all this is a game show and you’re putting your life on the line. Various upgrades and items are spawned as you kill opponents, providing you with better weapons, protection and more. Additionally, there’s a bonus level available which can be accessed only if players managed to collect a certain amount of keys.

Blast away mutant cyborgs, pulverize club wielding mechanoids and blow tactical assault tanks to smithereens. Win cars and toasters-but first destroy the metal munching twin cobras, 30 tons of angry Mutoid Man and more. After all, this is the TV game show with the ultimate in prizes… your life!

Complete alone or grab a friend to battle together in 2 player co-op mode.