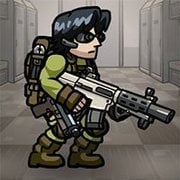 Strike Force Heroes 3 is the continuation of the award-winning action shooting game. It have more features, more weapons, and better graphic than the previous version in many ways. Join the elite forces to take own the enemy soldiers. More levels, more guns, and more maps.

We love weapons, you love weapons, everyone loves weapons! So now each mission/difficulty you complete has a unique reward for completing it. You may unlock a new class, a new blueprint (more on that below) or, on the later missions, a powerful, unique hero. If you were to replay older missions, you would get a random weapon every single time! No need to buy weapons anymore, you’ll be earning them automatically as you play!