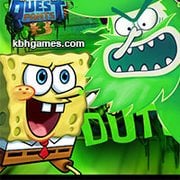 A action adventure game where you join Spongebob and Patrick on a quest to save Bikini Bottom of the ghost pirate of The Flying Dutchman Crew. Battle with ghosts and solve puzzles.

Are you brave and smart enough to save the town of Bikini Bottom?

Spongebob Questpants 3: The curse of the flying dutchman in a fun game based on the popular TV series from Nickelodeon: Spongebob Squarepants. In this action adventure game, you will join the best friends Spongebob and Patrick as they go on a quest to save the Bikini Bottom from the wrath of the ghost pirate named The Flying Dutchman. Whack the ghosts, survive the greeny ghostly horrors, and save the town you love in this awesome game. Have fun!

Revenge of the Flying Dutchman: SpongeBob