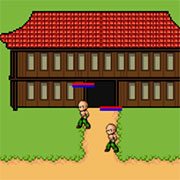 Protect your newly open Dojo from rival’s that want to steal your martial art paper scrolls.

Save money over time to make upgrades and train new fighters.

If you lose 25 or more scrolls it is game over.

5 type of fighters to train.

-Simple Fighter: Has nothing extra.

Enemy has 5 different fighter too. 3 of them has nothing extra. Other 2 fighters are robot and clone maker

Robot: Casts a shield when got hit. Shield lasts until his stamina ends.

Clone Maker: Has %10 chance to make a clone when got hit.

Will you be able to protect your Dojo? What is your strategy to winning?

Programming and game design by: Mapacarta.

Only use Mouse to play

Dojo related upgrades are in dojo tab. You need to make some upgrades here to unlock other fighters.

Important:
-Upgrades only affects newly trained fighters. Existing ones stay same.
-You can’t train new fighters when enemies are too close to dojo.