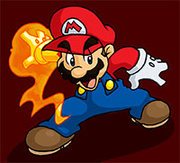 Mushroom Kingdom is in need of your help, dark magic covered the sky in crimson clouds. It turned all the kingdom’s inhabitants into stone statues, except for Mario and Princess Peach. It’s now up to Mario to find out the responsible for that, and to restore Mushroom Kingdom to its former state.

The adventure consists of exploring the land to find Power Stars, and with their powers, dispel the crimson magic, restore Nature’s Equilibrium and save the Universe’s Destiny, which’s also menaced by the one troublemaker. However, that’s not as simple as it seems.

As you progress through the game, more of the story is revealed, and complex event turnarounds happen as well.

Panic in the Mushroom Kingdom