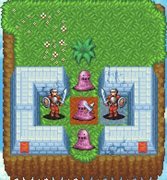 This is a demo version of features 21 levels out of 96 available in the full version.

A unique take on the tactic genre, Monstro lets you lead an army of humans or monsters through more than 90 levels, but only 21 levels in the demo. Unlike all other games, not even a hint of randomness can be spotted in the mechanics making it, ultimately, a very logic and calculated experience. Together with the handcrafted pixelart and orchestral soundtrack you’re bound to get hooked to your screen.

Control your human or monster army against your opponent in a logical fashion – no longer a sudden miss will break your strategy, no longer a spontaneous critical hit will reap death in your party; In Monstro, there is no Random Number God to toss lives of your men around.

Set in the fictional and unimportant land of Ludus, where sudden appearance of angry Sky Gods forces the poor inhabitants to battle each other, the game concentrates on what is important. It embraces the retro traits of olden games – minimization of unnecessary plot devices and maximization of gameplay. Not to mention the crisp pixelart that will make you remember the good times.

Full Version of Monstro: Battle Tactics is available for $3 (USD) on Monstro.retrocade.net and includes:
– 96 levels
– A total of 27 minutes of original soundtrack
– Four campaigns
– An enormous amount of logical struggle

Hint: Use F11 for full screen