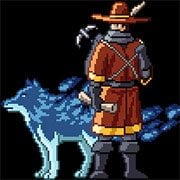 A great adventure game where you collect, train and battle monsters in the lovely pixellated world.

Monster Sanctuary is a faraway land from a human society where monsters roam freely. They are dangerous, but they grow loyal to their owners over time.

Take the role of a young heir of an ancient bloodline of proud Monster Keepers. Prove yourself. Begin your adventure by choosing one of four monsters that’ll accompany you. Gather a party of monsters to grow and train.

Make the game even better by supporting it on Kickstarter.

Monster Sanctuary is being developed by Moi Rai Games.