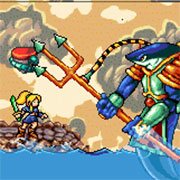 Join the fantasy world of Lady Sia where the player assumes the role of the Xena-esque warrior princess.

A side-scrolling platformer with European cartoon themes. Jump and fight through several levels filled with enemies and traps. Transform into a beast form when battling against the bosses.

Story:
Onimen, a powerful warlock, found ancient magic in the continent of Callyge. He used the magic to create a race of half-human/half-beasts known as the T’soas. Using huge turtles to transport his new army over the sea, he invaded the continent of Athorre, the human kingdom, and quickly took control. The remaining realms did not know how to react and their leaders forsook their military alliances. The only one convinced of the need to act was the young Queen of Myriade, Lady Sia.