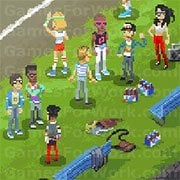 Pit one weird social group against another in a healthy game of kickball! Play as hippies or hipsters and take to the backyard to rehash the game that defined your elementary school social status. Skinny jeans, trucker hats, energy crystals, and questionable hygiene abound! Bring your own beard and biting cynicism.

Hipster Kickball is played with the keyboard.

When kicking, move your kicker around home plate with the arrow keys.

Press and hold the ‘X’ key to charge your kick. Release when the ball is near your player. He or she will run automatically.

When fielding, press ‘X’ to pitch the ball. After the opposing team kicks the game will select the right character for you to control. Use the arrow keys to run, and after you’ve caught the ball, throw it with ‘X’.

When battling, run around with the arrow keys, and throw your special power at the opposing player with the ‘X’ key.

The lead runner will advance one base and then stop by default. If you think he or she has time, you can force a run at the next base by pressing ‘X’.

Sometimes it’s worth skipping a battle and accepting an out. You have a limited number of battles per inning, so use them wisely! 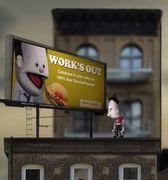