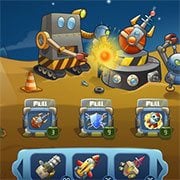 You are the commander of 3 secret anti-missile technologically-advanced bases that are the last hope to save Earth.

You can upgrade any anti-missile base with a variety of weapons and boosters but you must be careful as each choice requires strategy and skill.

The Martian has their own weapons as well, you must be prepared for quick decisions as the action increases dramatically once you reach the higher levels and the invasion from the Martian Kingdom reaches it’s peak.

Make sure to destroy their missile attacks or Earth’s last line of defense will fall.

So what do you say Missile Commander, are you ready to answer the call of duty and defend Earth along with the whole Galaxy, or will Earth bow down to the power of Mars?

The Story
The year is 2015 and humanity has made a big step: The Pry Rover has successfully landed on Mars, roaming in the Red Planet’s desert in search for any evidence of life form.

Unfortunately, scientists didn’t like what the mobile laboratory found, the inhabitants of Mars got infuriated by the ultra robot’s presence and it is up to you to save the world from the upcoming alien threat!

But you are not alone, your bases can be upgraded to deadly machineguns or bring up the heat using their ultra-charged laser beams. For the tough green-skinned guys, be sure to enable your most powerful weapons and the booster packs that will absolutely devastate your enemies!

So, what do you say Commander, are you ready for this challenge or will Earth as we know it end today?