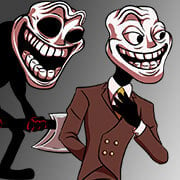 Friday Night Funkin' VS Minus Shaggy

A mod of Friday Night Funkin where Boyfriend went to visit uncle Trololo and started a rap-battle but things takes in horrifying turn of event.

Boyfriend is taken out by Girlfriend to meet her uncle figure, former Soviet baritone, Mr. Trololo. But after a while, things seem to be a bit… off.

Game is free, so if you had fun and would like to keep up-to-update on the mod, make sure to support mod creators on their social media by subscribing, following, liking, etc.

The goal of this web optimized port is to make FNF and this mod more accessible to players that can’t otherwise play it on their potatoes PC, on a Chromebook,  on their Mac, on their Linux, or simply can’t run the EXE files on their computer.