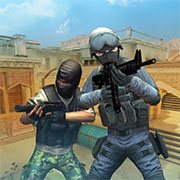 Enter the fray with guns blazing in this high-octane adrenaline-pumped action game. Play as either elite counter-terrorist operatives or armed terrorists out to make the world burn. Basically counter strike CS Go Online.

Forward Assault throws you into a selection of maps ranging from the urban settings to the snowy mountains and everything in between. With a multitude of your favorite military-grade weapons at your disposal, jump into the action with confidence and the intent of shoot to kill.

Defend the area from the threat of terrorism. Or, push together with your team of highly trained terrorists to bomb the target.

Play a classic team deathmatch where the team with the highest number of kills at the end of the time limit wins it all. Let the bloodlust take over and join the action-packed arena of Forward Assault.

Created by Blayze Games the same creator as bullet force.

Play on strategic & tactical maps and bring your team to victory.

You can also play a Ranked mode in this new FPS gun game, where you must climb the ladder and become the top player in the world.

FPS survival game, intensive action, incredible simulator that will take you right to the action. Run, hide, distract, aim, shoot, and kill. You better have a good plan to make your army win. Play offensive, defensive or counterattack, use tactical shooting strategies to assure your victory, but be careful, this is not as easy as it seems, you should have an elaborate action plan.

Are you ready to shoot, run, hide, and kill?