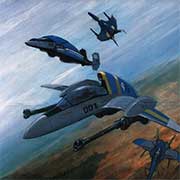 Head to war as you pilot a futuristic aircraft to battle against a new force from outer space called SlyTow.

The Earth feels the onslaught of a total takeover from a hostile and powerful enemy. They call themselves SlyTow. All countries from around the world fall before their might. The military is powerless against the SlyTow. The few who survive to flee to outer space to form colonies based on their former nations. The goal is to regroup and gain control of Earth once again.