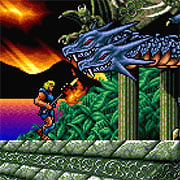 The Astyanax also known as The Lord of King is a side-scrolling action game developed by Aicom.

The arcade version of Astyanax is set in a fantasy world populated by mythical creatures from Greek and Arab mythology. The game consists of six stages: a forest, a cave, a lake, a lift, a castle and the final battle.

More details about this game can be found on Wikipedia.org