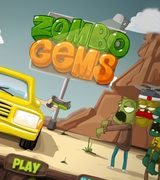 Mixture of physics match-3 and strategy. It include tons of upgrades and power ups. An amazing discover of a new crystal that can be potentially replace conventional fossil fuel was found deep underground. While scientists was trying to do research and development on this new crystal to see the side effects on the environment and humans beings, businessmen didn’t want to wait for the result and start marketing and selling them at gas stations to increase their companies profit. But soon after all people around were gone, hordes of hungry and angry zombies appeared instead of them. Use crystals on gas stations to fill your tank with gasoline and protect from the aggressive dead. They explode after contact with similar or simple crystals, thereby allowing to collect more gasoline to make a crushing blow.