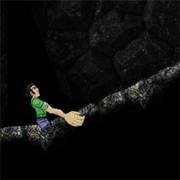 You Have No Legs

You Have No Legs is a 2D platformer, inspired in part by Super Metroid, where you must explore a large world, collect powerups and find secrets.

The game/’s hook comes from the fact that the main character, Jack, has no legs. As such, you cannot walk, run, jump or do most things you would want to do in a typical platformer. Instead, the game is entirely controlled with the mouse: you move around by grabbing and dragging yourself forward. As you explore the world, you gain new abilities that give you new moves, such as the ability to launch yourself into the air or to pick up and throw boulders.

Everything is controlled with the mouse.

Once you find the map, you can press M to open it.

Pressing S will mute all sounds and music.

The Tower of Druaga (Arcade)

The Search for the Dahu

Temple of the Golden Watermelon