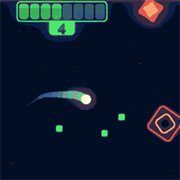 WAY BACK IN THE TWENTIETH CENTURY, as we reached for the stars, we came across an offensive entity, known as the PESTE NERA. This entity attacked our planet years ago, out numbering any defenses we had.

But now it’s our time to fight back.

We are VELOCE, the elite galactic defense force.  Equipped with the most agile fighters in the world, the enemy won’t know what hit them!

We’re counting on you!