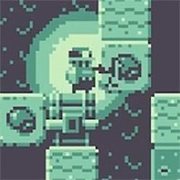 Race against time in Trappy Mine as you use your pickaxe and plant bombs to mine to the bottom where treasure awaits.

Avoid spikes, explosions and crushing crates and collect as much coal, diamond and coin as possible to compete for the top spot on the leaderboards.

Gamepad (tested on DS4, but should work on all similar gamepads)