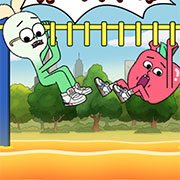 The Floor is Lava: Apple & Onion

The floor is full of hot boiling lava so don’t touch it. Use boxes to cover it.

Join the Apple & Onion characters from the animated tv show of the same name on the playground. Avoid falling into the lava and collect dollar bills.

Switch between Apple & Onion. Try to get three stars by collecting money and finishing quickly.