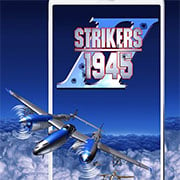 Pilot an aircraft into battle during World War 2. A retro shoot em up game that takes you back to WW2. Shoot down enemy aircraft in the sky and tanks on the ground. Survive by dodging incoming projectiles. Collect powers to increase your fighting power.

Choose between one of six planes or ask the computer to choose one randomly. The first four stages are in random order, while the last four are sequential. Players will have to collect weapon powerups, bombs, and gold bars for points. Each plane has a unique “supershot” which is charged by damaging enemies and fired by holding then releasing the fire button. Supershots can be stored, although the number varies from plane to plane. Using a bomb results in a large friendly fighter swooping onto the screen and blocking shots while returning fire for a few seconds.

Willy you return home as a real life hero or a fallen hero?