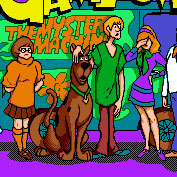 Scooby-Doo Mystery is a video game based on the Scooby-Doo animated series.

An adventure game with platforming elements. Player will take control of Shaggy Rogers and Scooby-Doo, who help solve various mysteries with other members of Mystery Incorporated who serve minor roles during gameplay.

There are four levels in the game, and the player receives a password after each one to allow them to return at any time.

Scooby Doo and The Race to Wrestlemania