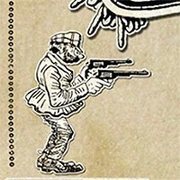 Be that atrocious Ruffian and shoot everyone in your way! Think of ways to shoot a lot of people in just one shot. The less bullets you use the better you become!

Ruffian is an old newspaper cartoon character that seeks historical justice. He was neglected and disregarded by upper classes for too long, but the time for putting paper over the cracks has passed. Now is the time for slapstick cartoony revenge.

Guide your gunslinging anti-hero through the series of brain-teasing spatial ricochet puzzles that will test your wit, agility and reaction speed.

Score highest scores by hitting all targets with as few bullets as possible.

Show those arrogant high-brow paper goodies from the “Fashion life” and “Modern family” sections what a killing article really means!

This game’s visual and audio style is a love letter to the early 1900-20-th newspaper cartoon comedies, commercials and comic strips. Some of the models and visuals are a tribute to the works of James Guilford Swinnerton (main character design) and Charles William Kahles, prolific and influential cartoonist. Among the latter’s creations are comic strips dedicated to the hilarious adventures of Hairbreadth Harry, his fiancée Belinda and their archrival, iconic villain Relentless Rudolph.