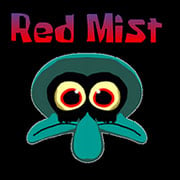 A first-person horror game about the death of Squidward from Spongebob.

On 7th January 2000, Squidward was found dead in his house, by his friends Spongebob and Patrick. The “Bikini Bottom Police” started an investigation, but could not find any evidence of a possible murderer and assumed it was a suicide as the gun was in one of Squidward`s hands. A few days later Spongebob and Patrick were reported missing, last seen entering Squidward`s house in the middle of the night. As the “Bikini Bottom Police” continued the investigations a secret cellar door was unveiled in Squidward`s house.

You play as one of the police officers of the “Bikini Bottom Police”. You have to enter the cellar. Will you unveil the TRUTH?

(This game was inspired by the creepypasta “Red Mist”)

There are 4 different endings:

You can collect 7 “Squidward`s Items”. The number of found items has an impact on your ending.

The game is free and you don’t have to pay anything but you can make a small donation if you want :)

Revenge of the Flying Dutchman: SpongeBob

SpongeBob Creature from the Krusty Krab