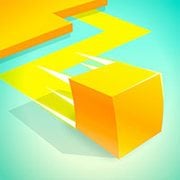 Battle for territory and try to gain the highest percentage of territory on the map. Paper.io have elements of classic tron, snake, and Xonix. You die when you run into your own trailing tail or another player does. Try to gain as much territory as you can. More territory equals more points. CLimb to the top of the leaderboard for all to see. Develop your own strategy and action plan.

You can play paper.io online and offline both on a mobile device and a desktop computer. Get paper.io and join the world gaming community. Manage a small board and win territory from your rivals.

Paperio has simple rules but is very addictive in its simplicity. The competitors are also on guard. Watch out for your tail.

Play with people from all around the world, from work, college campus, and at home.

Paper IO was developed by voodoo.