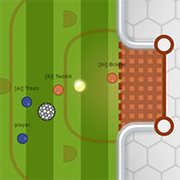 A fast paced 3-on-3 online multiplayer soccer/football game. In Nitro Clash IO, you control a colored ball that acts as your player. Move your player like around like a real life soccer game where the objective is  to kick the ball into the goalpost. Use nitro to boost speed, but be aware that speed boost is limited and the power bar refills over time.

Work together as a team to win against your opponent. Someone should become the goalkeeper  defend the goal at all times while two other players attack and try to score. After each goal, the ball is reset in the center circle and you must make a dash to try and get the first kick.

Pick the server closest to your location for the best experience and reduced lag.

Can you reign as the soccer champion and help your team achieve victory?

Objective:
Push the ball into the opponent goal