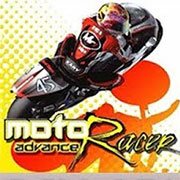 Moto Racer Advance features several different modes, but much of it centers on a “Progression” mode, which requires the player to compete in races in a variety of environments.

Gameplay:
The player controls a motorcyclist and must try to win races on various terrain and settings. Each motorcycle in the game handles differently with some performing better on paved roads and others working better on rougher terrain.

There are a number of different modes: Grand Prix (GP), Motocross, and Traffic. GP takes place at a number of different locations across the world on paved tracks in places such as San Francisco and Russia. The paved tracks require the player to learn how to effectively use their brakes around corners. The GP courses contain small differences between them, giving more variety to the courses in the game. Motocross requires the player to drive on off-road terrain and to master the act of “powersliding” on corners. The courses found in Motocross races are less hospitable and often take place in arid and unkept locales and with obstacles. Traffic mixes both GP and Motocross, having mixed pavement courses and traffic on roads that serve as obstacles.

There are three different methods of gameplay: Championship, Progression, and Single Race. The single race mode must be earned by playing the progression mode. Progression is the game’s “main mode” and places the player in a number of different tournaments and races in all three racing styles. It allows the player to earn hidden content, including new bikes which handle differently. The game contains link cable support for up to four players, provided that all four people own a copy of the game.

Use the Save button to download the save code of Moto Racer Advance to your computer. Use the Upload button to select the save code from your PC to resume where you left off.