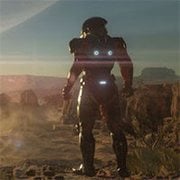 A fan fiction visual novel of Mass Effect titled Andromeda Prelude. Beautifully made with high resolution graphics. Take the role of Commander Shepard. He was contacted by the member of the Andromeda Initiative on an important issue. Enjoy in on the interactive experience of the Mass Effect universe, which serves as the bridge between the original trilogy and an upcoming ME: Andromeda game!