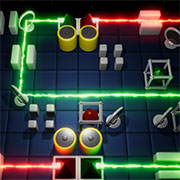 LUMA+ is laser based sliding puzzle game where the goal is to connect lasers to targets of same color by using mirrors to deflect the beam. Activate the lasers using batteries. Each level must be solved within a specific amount of moves.

The game has 128 fun and challenging levels!

Luma+ is a Windows port of the amazing game Luma, made by Shallan for the C64.

Use mouse to select and move game objects.