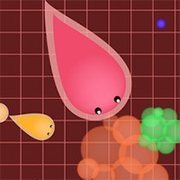 *** New TAB will Open where you can play on external site.

Limax.io is a online multiplayer game. Join other players from around the world and try to become the biggest slug! Team up and crush other players.

Limax.io is essentially a hybrid of agar.io and slither.io, although it is very much it’s own game. You are a blob and you try to set ‘traps’ for other players to run into.

You spawn into the game small, like in slither and agar. Next, you want to try to gather a good bit of mass so that you will be able to start hunting other players. A good strategy that I use is I try to gather up just enough mass so that I am immediately able to attack another player should they get too close. The nice part about this game is that just like in slither, no player is too big to be safe. Even the small little guys can easily cut you off and eat you if you make a wrong move. This keeps the game moving and interesting. I highly recommend that you check it out!