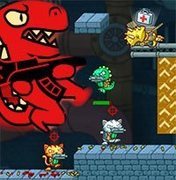 Dinosaurs would thought to be extinct, but one lived forced to live underground and imprisoned by evil kittens.

Lead your revolution to victory against the evil cat empire and secure freedom for your people!

Buy upgrades, manage your team and shoot guinea pigs strapped to rockets against a host of colourful animal enemies! Then when you complete the game, the fight rages on in endless mode!