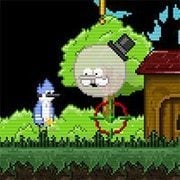 Killer Z’s finds Mordecai fighting mixed-up enemies in a strange dream world. When Mordecai falls asleep while playing video games, he gets trapped in a game-like dream filled with bad guys that are bizarre versions of his friends. Luckily, he has Pops and Margaret to guide him, but he’ll need to level up, unlock upgrades and learn new skills if he wants to make it to the end. And if he doesn’t beat the final boss battle, he might never wake up from his dream! Help Mordecai face magic and mayhem as he battles to escape the dream world.

Watch the show on the Cartoon Network TV channel.

Adventure in the Dream World