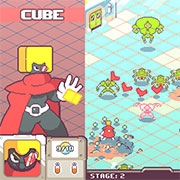 He conquers space and binds alliances with other planets.

In contact with Spheres, some races develop unexplored potentials
They are called guardians.

But one day, the planet is attacked by an unknown species, the guardians choose to attack…