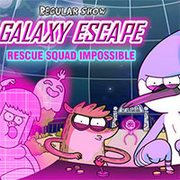 Join Rigby and Mordecai in outer space as they operate a spacecraft in order to rescue their friends that is in problem. The spaceship is equipped with lasers, bombs, and much more.

Maneuver around asteroid fields and take down your enemies with a variety of weapons. Unleash your super attack to devastate your opponents.

Watch the show on the Cartoon Network TV channel.

Battle of the Behemoths | Regular Show