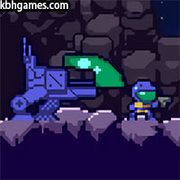 A retro platformer where you can transform between pilot and mecha mode and fight against an army of evil robots.

Each time you play the levels are randomly generated, which means you’ll never get bored.

Features:
* Your mech runs on power, which can be refilled by attacking enemies as the pilot, or in special refill rooms. When you exit your mech, beware of the coolown before re-entry!
* The pilot can double jump, has a repeating laser gun and a 4-directional energy spear.
* The mech can preform a sustained horizontal dash in midair, aim its lasers diagonally, and fire a limited number of rockets.

We Are The Robots

Ant-Man and The Wasp: Attack of the Robots