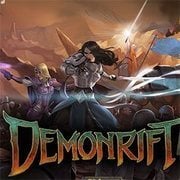 In Demonrift TD, defend the kingdom of Emaeron from demonic surge all over the country!

Try this unique mix between Tower Defense and unique turn base strategy game.

King Imkael has fallen. The beloved king was killed in a gruesome battle, defending the last free city in the kingdom of Emaeron. Nothing could foresee this hellish invasion.

In Demonrift TD you are taking the role as Baroness Milena, commanding last stand of empire troops against the mysterious surge of demon armies throughout the empire vast cities.

Upgrade your troops, build and upgrade defended cities to help the empire army wages war against the demons, and start defending the kingdom now!

Use the mouse to navigate, or optionally you can use keyboard to scroll the map in any direction when available.