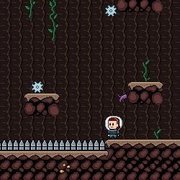 Darktopia is a platformer game about a woman named, Lorraine, trying to escape from an ancient ruin populated by undead creatures. Her expedition team was tasked to acquire the infamous Idol of Tavor from an ancient ruin deep in the Tavor jungle. It was an ordinary expedition until the ruin’s denizens who guarded the Idol started to attack. You managed to survive the attack but got badly injured. You have to recover your strength and find a way to escape the cursed ruin. But beware, such task won’t be easily accomplished!

A Platformer for Ants