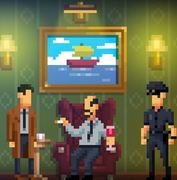 The Darkside Detective is a awesome pixelated action adventure game.

Where cultists crawl, where demons dwell, where the occult… occults? you’ll find Detective Francis McQueen, the sole member of the criminally underfunded Darkside Division. When evil darkens the doorsteps of Twin Lakes City – hell, even when it just loiters around shop fronts or hangs out in shady alleyways – he’s there, ready to investigate the cases that nobody else will. He is The Darkside Detective.

The Darkside Detective is a micro-adventure game with a distinct art style and charm. It’s being developed for PC, Smart Phones and Tablet devices, and is set to be released later this year. The game consists of a series of humorous bite-size investigations into the occult and extraordinary.

A Curse In Disguise: Dead Detective