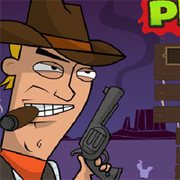 Harry Hotdog never believed the myths and legends told of the Dead Man’s Curse Saloon. He thought it was just a good way to draw the crowds. They also serve the best darn whiskey in all the territory and more importantly, let him run a tab. It’s a crying shame that it turns out the stories were true. Underneath the saloon, a whole mob of pirates were buried, and they’ve come back to life. Hungry for brains and thirsty for rum. But Harry Hotdog ain’t giving up his favorite watering hole without a fight…

Story mode introduces the first chapter of this epic fight for
survival: “The Quick and The Undead.” There are 32 stages of fast and furious shoot ’em up fun. As well as your trusty six-shooter, you’ll find a host of different weapons to take down the relentless dead. These include the spinning fury of the saw-disc-gun and the ever faithful boom-stick. Collect loot and search for treasure to buy upgrades to your stats and weapons.

Multiplayer Battles allows you to compete against up to 5 online players to see who’s the meanest zombie pirate slayer in town. There are 3 different challenge modes, 8 different arenas and 3 levels of difficulty depending on how lily-livered you are! Special pick-ups are available which can really mess up the opposition. The best gunslingers get to improve their stats and work their way up on the global high scores list.

In The Hunt (Arcade)