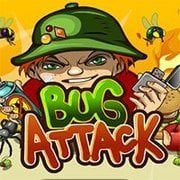 Main action is set on a usual dining table. Thanks to main character’s (a little boy’s) imagination, the table turns into fantastic battleground with hordes of enemy insects. All this happens right after family dinner. At a moment the child stays alone and terrible threat appears on the table. Awful bugs are coming forward to sugar-bowl. Our hero decides to start an unequal fight with the enemy. But ingenuity and power of imagination come to his aid – using surrounding stuff, things and toys he builds an impassable defense line; and waves of attacking invaders beat against it. The hotter the battle is thickening, the more fantastic surrounding world is becoming. The game is oriented on everyone, and will be interesting for a child as well for a grown-up.