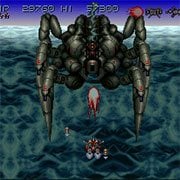 Axelay is a amazing sci-fi retro arcade bullet-hell video game. The game features both horizontal and vertically scrolling levels, and allows the player to choose three different weapon-types, which increase in number as he or she progresses through the game.

Axelay takes place in the fictional planetary system known as Illis. Once a peaceful system, it was invaded by an alien empire known as the Armada of Annihilation, taking over the planets of the Illis system, including the Earth-like Corliss (known in the Japanese version as “Mother”). As a last resort against the alien forces, the D117B Axelay fighter is sent out to recover its lost weaponry and put a stop to the invasion.

Require lighting fast reaction and skills to beat this game.