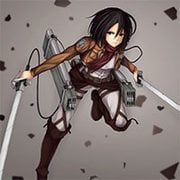 Take the role of bad-ass girl Mikasa Ackerman, her job is to defeat as many giant monsters called titans. Use the creative and innovative technology called the three dimensional maneuver gear or omni-directional mobility gear attached to her waist to launch herself vertically in the air to reach the height of titans.

Use surrounding building with your maneuver gear to get close to the neck area of the titan and slash their neck off. It had to be their neck area to finish them.

A Fan-made arcade based video game based on the Anime and Manga franchise of the same name Attack on Titan (“Shingeki no Kyojin”). You’ll be playing as the female protagonist Mikasa Ackerman.

How far will you be able to go? What is your highscore? This game is simple, yet hard, but fun.

Attack of the Johnnies