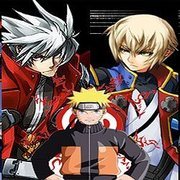 Battle between naruto, bleach, one piece, fairy tale, and many more heroes from popular anime or classic arcade fighting games. 2 new character from the BlazBlue game is added in this version: Ragna the blooded and Jin kisaragi. If you haven’t played Blazblue yet here is some information about the new characters.

RAGNA THE BLOODEDGE
Attack style: Close Combat, Giant Sword / Azure Grimoire
Ragna is a criminal with a large bounty on his head – and the centre of the BlazBlue story. He attacks with a giant sword releasing beast depicting forces on his enemies. His powerful Azure Grimoire can also absorb the energy of others making Ragna a powerful foe.

JIN KISARAGI
Attack Style: Ice based projectiles / Sword
Calm and collected and only interesting in himself, Jin is also Ragna’s estranged brother. Jin’s special attacks allow him to use ice to freeze his opponents and fire deadly frozen projectiles.

Key combinations: the keyboard arrow keys ← → ↑ ↓ + 4,5,6 keys and WASD keys + U, I, O bond issued composition skills, explore on your own for combinations.

This game is 20 times LARGER than other games. Please be patient while it load. Go to watch a YouTube video or something.

Tower of the Archmage

Book of Mages The Dark Times

Diamond In The Rough